PABRADE, Lithuania (June 20, 2017) – As the sun begins to set on the Lithuanian countryside, the final touches are put on the camouflage netting designed to break the silhouette and conceal the position of the Tactical Action Center, or TAC, of the 1st Armored Brigade Combat Team, 34th Infantry Division on June 17, 2017. As part of the multinational exercise of Saber Strike ’17, the 1/34th ABCT is providing support to the Air Assault Task Force Commander, Col. Charles Kemper.

As the first ever combined air and ground assault in the annual Saber Strike exercise, this year’s exercise has set a milestone in testing the compatibility of seven nations and all military branches.

“We want to reassure all of our NATO Allies that we are in this together,” said Kemper. “We’re part of the team and we can demonstrate capability.”

Kemper also stated that the U.S. is beyond just assurance; we’ve moved to deterrence. We are going to deter anyone who poses a threat to our NATO Allies and demonstrate our capability to let them know that we are an alliance that is going to stand ready with our partners.

“This exercise is designed to build and increase the interoperability of all NATO contributing countries allowing us to boost our capability to react quickly to any world threat that occurs,” said Capt. Josip Jurjevich, a Croatian Air Force helicopter pilot attached to the 1/34th ABCT Aviation element.

Throughout the planning process, American Soldiers, Sailors and Airmen worked side-by-side with service members from the United Kingdom, Poland, Croatia, Lithuania and Portugal, testing their ability to work together as one cohesive unit and ultimately forming a NATO enhanced Forward Presence, or eFP, Battle Group.

A challenge that takes time to overcome is the fact that you are taking people from different sides of the world to work together on the same mission when they don’t have the same ways or customs of doing things, said Jurjevich. Saber Strike is a great opportunity for all participating nations and units to gauge where they are in regards to working as a cohesive unit.

During the planning process, the U.S. aviation planner implemented input from the two Croatian pilots attached to the TAC to plan helicopter air corridors from the Pickup Zone to the Landing Zone. Their counterpart took their input into consideration and implemented it into the overall mission.

“Even if something is better than our process, that is great, we’ve learned something, or if it’s not, then we can bring something forward for them to learn,” said Jurjevich.

With all seven nations converging at the Kazlu Ruda airstrip, the newly-formed Task Force Red Bull conducted an air mission brief and a combined arms rehearsal. These two briefings are held to work out the final details of the air and ground force to ensure all nations and their assets are marching to the same drum.

Improving overall coordination and professional relationships with Allies and partner militaries during this exercise has become a focal point for all those involved. A strong foundation of trust is crucial when forming a relationship with members of the NATO alliance.

Tight living quarters shorten the period of time it takes to become comfortable with one another, said 1st Lt. Josip Perich, another Croatian Air Force helicopter pilot attached to the 1/34th ABCT. “With 18 of us crammed into only two trucks working together on the mission, we are able to develop trust and confidence in one another very quickly.”

A pre-established relationship between nations through exercises like Saber Strike is meant to lay footwork for a long-lasting rapport with all of our fellow NATO Allies.

“We were like a family in two small trucks, working together, sweating together for the same collective mission,” said Perich. 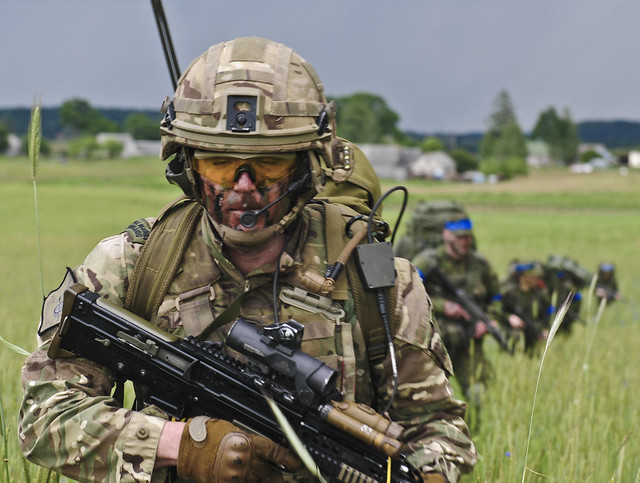